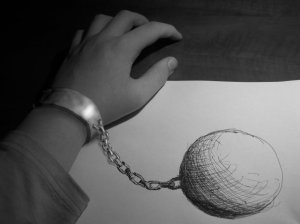 Raven et al. (1998)1 outline the concept of legitimate dependence as a function of the relative power and powerlessness that simultaneously exists for the parties within a relationship.

This concept can be further explored from the perspective that power is enabled through the possession of and exercise of control over access to scarce resources (see earlier blog post Definitions of and Motivations for Power), where the less powerful party is willing to trade off direct access to certain resources in exchange for assurances that their needs and wants for key basic scarce resources such as food, water, shelter and social order will be consistently and reliably met by the more powerful party.

In this sense it is evident that such a mutually beneficial arrangement is founded upon the belief held by the less powerful party (whether an accurate reflection of reality or not) that they are themselves unable to secure certain key basic resources; their willingness to support a system that is to their own relative disadvantage is informed by the fundamental nature of the resources in question, the high stakes involved, and the serious consequences that would result should access to these scarce resources not be obtained. For these reasons the resources trade-off is deemed to be worthwhile.

In light of this, what benefit does the more powerful party gain from a legitimately dependent relationship? The answer to this question is that by releasing sufficient quantities of provisions to fulfil the basic needs and wants of the less powerful party they are, in return, rewarded with preferential access to other higher level resources. These higher level resources include enhanced social status, increased levels of material wealth, and ease of access to other scarce resources. This reward structure is agreed to on the condition that the provision of basic resources to the less powerful party continues. However, any failure in the degree of consistency of this provisioning will lead to the position of the more powerful party coming under threat.

This type of arrangement is widespread and forms the basis of much of what we consider civilised society. National and local government is tasked with utilising tax revenues to ensure that the population has adequate shelter, water, utilities, infrastructure, justice, civil order, defence, welfare, education and healthcare. This is the case not only because as a government it occupies a unique position to pool the vast resources required to successfully execute this provisioning at scale, but also because it is understood that those who possess ultimate responsibility for the successful fulfilment of these critical functions will be favourably rewarded relative to the less powerful parties in such an arrangement.

One related aspect to consider is where the ultimate power lies in a legitimately dependent relationship. Failure to deliver the needed and wanted basic resources leaves the more powerful party vulnerable to overthrow either through the democratic process, through civic action, or by some other means. However, for as long as expectations are fulfilled to the satisfaction of the less powerful individual or group, the arrangement will be deemed to be acceptable and considered as being broadly fair. Nonetheless, the less powerful party is left vulnerable to certain manipulations of the power relationship by the more powerful party as a consequence of its having voluntarily relinquished its claim on certain scarce resources. The question then is: beyond what point does the more powerful party’s claims on preferential access to certain scarce resources cross a line in the eyes of the less powerful? At what point does legitimate dependence lose its legitimacy and become illegitimate?

A further aspect to consider is the point at which the arrangement of conditional provisioning in exchange for reward becomes a dysfunctional one. Not every legitimately dependent relationship takes place at a national or local government level. For example, a tacit arrangement of this type sometimes develops in a marriage context whereby one partner has many of their basic needs met by the other in exchange for their own general compliance with regard to the important issues and decisions being made in the household. There is a hand over to their spouse/partner of their legitimate power as an equal party in the relationship in exchange for their basic and not-so-basic needs and wants being met. However, in so doing, there is also a simultaneous abdication of their responsibilities as an Adult in the Transactional Theory sense of the word. Such an arrangement tends to be dysfunctional because at its root is the foregoing of power based upon a falsehood that the basic resources in question cannot be obtained by that individual outside of the relationship, whereas in reality they often can. As such, one party chooses a position of reduced power in relative terms and in so doing abdicates their responsibilities, taking up the role of Child to their partner’s Parent. This stands in contrast with a legitimately dependent relationship between two adults or two parties each acting out of an Adult role. In this situation one party might possess less power relative to the other, however their actions take place out of a genuine position of relative powerlessness, one that has not been freely chosen, and one from which the less powerful party still seeks to maximise its access to the needed or wanted scarce resources.