‘Fame is not fastidious about the lips which spread it. So long as there are mouths to reiterate the one name, it does not matter whose they are.’ Elias Canetti – Crowds and Power 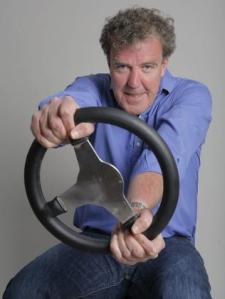 The Power of Jeremy Clarkson

As the Jeremy Clarkson furore continues (you can read more about it here) we are told that a petition to have him reinstated to his role as presenter on Top Gear and therefore escape the serious sanction of dismissal had, by the time it was submitted, garnered one million signatures.

By any measure this is a huge response on the part of the general public. It is one thing to have the groundswell of public opinion behind a cause, it is another for the extent of that public opinion to be such that individuals are compelled to seek out a petition and put their names to it in support of that cause. Furthermore, from what we understand of the circumstances, Clarkson was not the victim of the incident in question but was the aggressor. We also know of a number of previous occasions where he has behaved inappropriately or has caused serious offence (see here, here and here). We know that this is not an isolated incident.

And yet, rather than appealing for justice to be done and for appropriate punishment to take place, the groundswell of a significant portion of public opinion is for the opposite outcome, that is for Jeremy Clarkson goes unpunished and that the normal principles of employment law (and presumably the BBC’s own internal code of conduct) are set aside. It would seem that on this occasion, the rights of the victim are to be ignored.

The question is why? Why are so many people eager to throw their support behind Jeremy Clarkson in such an emphatic way?

From a power perspective this question can be rephrased. What are the scarce resources in Jeremy Clarkson’s possession over which he controls access and which enable him to have others do what he would have them do? (This question assumes, of course, that during normal service Clarkson actively behaves in such a way so as to increase his popularity. He may deny this, however the evidence would suggest otherwise. A quiet life lived well out of the public eye would very quickly and effectively diminish a person’s profile if they were truly serious about achieving this). Or to put it another way: what is it that Jeremy Clarkson has that other people need or want, and need or want to the extent that his influence in their lives prompts such an emphatic and supportive response?

It is straightforward enough to consider the financial resources that he controls where his employers at the BBC are concerned. Reports suggest that the program nets the Corporation £67 million income per year and this explains their ongoing reluctance to dispense with his services where many others would not have survived for nearly as long. This control over scarce financial resources (financial resources are usually scarce in nature), provides Clarkson with the leverage with which he is able to wield power over his bosses. Signifiers of this power-holding position include an unwillingness to change his behaviour following previous misdemeanours, and a lack of contrition or shame following his suspension from such a high-profile public position. For example, during the past two weeks Clarkson has remained very much in the public eye and has been willing to court media attention during the period of his suspension, an indicator of his understanding of the nature of the power relationship that exists between himself and senior management at the BBC. He recognises that it is he who is the power-holder and that his employers are not. What is less obvious, however, is the nature of the scarce resources that Jeremy Clarkson possesses to which many members of the British public wish to gain access.

What Clarkson has succeeded in achieving is the cultivation and projection of an image of himself as the everyman: dressed in jeans, a little advanced in years, unrefined in manner. However, this everyman is also an everyman that is able to regularly indulge in activities and behaviours which many ordinary men in the UK cannot afford such as racing expensive cars in exotic locations. He is also at liberty to indulge in many activities and behaviours that many avoid due to the fear of social sanction, such as acting impulsively, speaking their mind in certain situations, making racial slurs etc. In this role Jeremy Clarkson has become an outlet for many ordinary (and some not so ordinary) men living in the UK who can vicariously live a certain part of their lives through his various antics. The power he wields over them is the embodiment of the daydream that, however remote, it is possible for the average man to escape from his everyday life and indulge in a lifestyle of unhindered petrol-fuelled hedonism, one in which disapproving voices can be sidelined.

Clarkson’s power, then, is two-fold. Firstly, he controls access to the scarce resource of a fantasy, a particularly male fantasy with which many men in the UK (and many beyond) can identify in him and through him. Secondly, he himself is a scarce resource. There are few public figures in this country doing what he does and saying what he says. Because Jeremy Clarkson is a clever man who recognises this, he is able to use this public support to wield power not only over the BBC, but over any individual or group to which he might happen to take a disliking for.

There is much to be said about the importance of all of this in relation to the concept of identity for the contemporary British male. There is also much to be said about the psychology behind the particularly male tendency of attaching identity and status to the car (or cars) they own and, in a related way, the car as a symbol embodying individual freedom. However, that discussion will be for another time.

One last question to ask is who or what it is that wields its power over Jeremy Clarkson? After all, here is a man who appears determined to remain in the public eye and who regularly and deliberately courts controversy in order to achieve this. Here is a man who appears driven by someone or something; a man with a pressing need to be noticed, to be remembered, to be approved of. Canetti1 describes the impersonalised nature of celebrity in a passage entitled Fame: ‘A celebrity collects a chorus of voices. All he wants is to hear them repeat his name. As long as there are enough of them and they are versed in his name it does not matter whether these voices belong to the dead, to the living, or to the as yet unborn.’

Is there something from Jeremy Clarkson’s past that drives him, compelling him to find ‘a chorus of voices’ that will repeat his name? Or is his need for the scarce resource of celebrity driven by the ultimate power to which all are subject and which, from the future, looms over every moment of the present, that of his finite mortality?

Definitions of and Motivations for Power

You could say that there are two types of people in this world: those who hold positions of power and those who do not. However, that would be incorrect. In our lives most of us are able to both exert power in certain contexts while being subject to the exertion of power upon us in others. Sometimes in a relationship between two individuals, the exertion of and subjection to the power dynamic will change depending upon the context.

While Pittman & D’Agostino1 and Fiske2 go some way towards defining power with reference to the capacity to exercise control over scarce resources, it is proposed here that a definition of power ought to have this concept at its core. A scarce resource can be defined as any resource that an individual or group identifies it is in need of and of which there is a limited supply. As such, scarce resources can take the form of food, water, shelter, fuel, money or consumer goods; and the definition can be extended to include resources such as societal structure, law and order, health care, defence, infrastructure etc. However, the definition can be extended yet further to include less tangible resources such as social inclusion, affirmation, validation, love. All of these resources are essential to an individual’s well being and at times survival. Furthermore, the non-ubiquitous nature of these resources renders them scarce and therefore of use to an individual or group seeking to utilise them as leverage in the securing of and subsequent wielding of power.

In light of the above it is suggested that the reasons behind the draw towards the trappings of power and the motivation behind the desire to occupy positions of power, can be summarised as follows:

Motivations for Power and Sexualised Regression

Paradoxically, that which drives an individual towards power, it is suggested, might also be a direct response and reaction against the desire to regress and return to an infant state. A position of ultimate power can be viewed as the polar opposite of the infant state of powerlessness, and the drive within an individual towards a position of power and thus a position of control can, in certain circumstances, be driven by the denial and repression of this part of the self, a part of the self that is perceived as weak and thus a part that is despised. Power holders are often associated with an intolerance for the perceived weaknesses in others (identified as a form of projection of themselves onto the other)3 and, in terms of sexual preference, anecdotal evidence suggests that many of those who indulge in fetishes that involve being dominated sexually are those whose day job involves occupying a position from which great power can be exercised. It is suggested that this regression, taking a sexualised form, acts as an outlet and as a means of exploring a repressed part of the psyche that longs to return to a form of infant state.

What might be the extent to which the drive towards and attainment of power evokes sexualised tendencies? Could regressive tendencies that were present all along effectively drive the desire for power attainment?

Welcome to the Psychology of Power blog!